From €115.00 / d
Please select a date to get detailed pricing information.
Reserve

Arkko has been named after its last residents. Väinö and Hilda Arkko were warm-spirited Verla denizens who moved to the cottage in the middle of the 1950's. Väinö worked at the factory as a greaser, and he had a lot of stories of Verla. Hilda was a chef who valued hospitality above all else. Hilda could often be found at a party in Seuratalo even in her golden years, hosting and brewing coffee.

Valkeala Bostad 14 was built in 1898. Its first occupants were apparently the Karppinen family. Tobias Karppinen came to work at the factory in 1887 and retired in 1940. Originally from Oravala, Tobias worked in the factory as a sander and later also as a night guard. Other members of the family were his wife, Eeva-Stiina, and their daughter, Anna. The linden tree in the yard was planted by Tobias Karppinen. He sold the cottage to the factory in 1911.

Later the cottage became known as Vesa's Cottage, when Anna married Kustaa Vesa and they settled in Anna's father's cottage. Kustaa operated the press in the factory. Kustaa and Anna had children, Eeva and Eino. At least Eino worked at the factory, in the same job as his father, and continued to live in the cottage until he bought a house of his own.

Arkko is a fully renovated wood cottage built in 1898. It has a spacious kitchen-living room. The main building is 30 square meters, and at the shore there is also a sauna and a bedchamber. The cottage is fit for winter habitation, and it houses four to six people.

Note: Finnish winter quite often includes lots of snow. So be prepared to do some snow removal when you arrive.

The cottage is located approximately one kilometer from the Mill Museum at the Vähä-Kamponen shore, downstream of Verlankoski. The cottage has road access.

Note: Bed linen or towels are not included. Remember to bring your own.

The cottage is reservable only through the online booking system. The reservation process begins by clicking the "Reserve" button under the main image. If you'd like to book more than one cottage at a time, add each of them to the shopping basket and only go to checkout once all of them have been added to your basket.

The cottage is at your disposal from 3 PM on the arrival date until 11 AM at the end date. The guests may visit the cabin only during the reservation period.

The keys are located in a key box directly at the cottage. A PIN code is sent as an SMS message to the phone number the guest entered upon ordering approximately two hours before the reservation start.

The guest is responsible for the key for the entire duration of the reservation. The key must be returned immediately after the stay to the same key box from which it was collected. Failure to return the key results in a charge defined in the Terms and Conditions.

The Guest is responsible for the cleanliness of the cottage, its yard and all attached services.

The cottage must be thoroughly cleaned after use so that the next visitor will have a pleasant arrival at Verla.

Trash should be sealed in a plastic bag and put into the waste bin located at Seuratalo.

Pets are allowed in this cottage. Pet owners should pay special attention to the final cleaning so that the next visitors will have a pleasant start to their stay.

The Guest is fully responsible for the entire cottage as well as their friends. See the Terms and Conditions before you make a reservation. 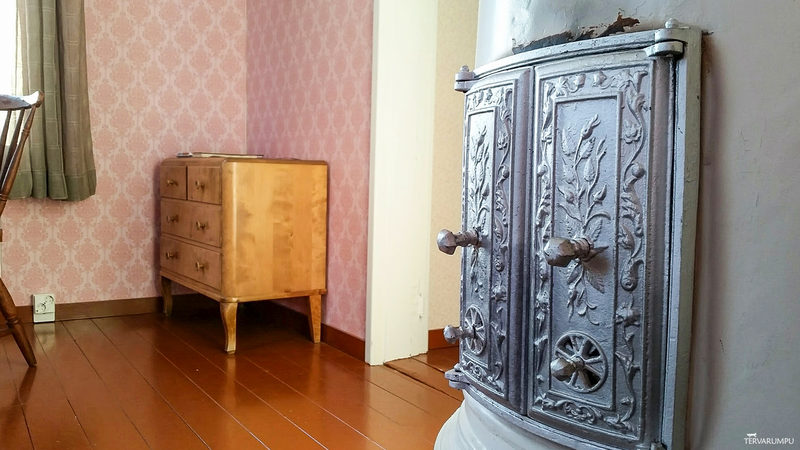